Being a ham radio amateur for almost 30 years I was never a really HF guy and till December 2019 never passed beyond technician license and it’s privileges such as VHF and UHF communication and basic Oscar satellite communication.

Having said that last 8 months I am heavily involved in HF and especially so called digital QSO modes. This quest also pushed me to obtain a general class US amateur radio license!

My HF digital modes adventure started on summer of 2019 while searching for LORA type long distance low power radio data communication. On my google search I came across a digital mode for testing propagation called WSPR. I was hooked and baffled by the simplicity and long distances this particular data format can travel.

So my wspr adventure began and ended up designing a WSPR transmitter with ESP8266 called ESPWSPR. I wrote two articles on this transmitter on www.antrak.org.tr.

My biggest problem was as I wasn’t a HF oriented amateur radio operator so I didn’t have a HF rig to test my wspr transmitters and hear what they sounded like.

I ended up in a close chat with my best friend google! This time the quest was to build a simple poorman’s HF SSB receiver!

I checked the designs online on the web for SSB receivers and realized that a proper HF receiver is a kind of a challenge for a HF challenged digital oriented guy like me. This was because of two basic reasons: I didn’t have the test rig to test these designs and inductors! For some reason I am not at all fond of inductors. I think of them as magical devices which have their own mind! They sometimes work and sometimes create you lots of headache.And to fix the headache you need a proper test equipment.

Ok let’s take a break here and talk about what is digital modes in amateur radio are. Digital modes is a means of QSO or two way communication with the help of a computer or digital means connected to a ham radio rig.  This is not a new concept actually, like RTTY, PSK31, AX.25 Packet, PACTOR, AMTOR etc. are digital communication modes or methods.

Now there are another set of interesting digital communication methods called weak signal communication protocols. These are all devised by K1JT Joe Taylor from Princeton University. The most popular of these modes are WSPR,FT8 and FT4. There is also other ones from the same family, JT65, JT9 etc. My aim was to build a simple receiver for WSPR.

After hours of search on google I came across an IC called NE602/SA602. This is a quite popular Integrated Circuit among hamradio enthusiasts. Almost all the simple designs were utilizing this magic IC! When this IC was involved things were simpler with less inductors and less parts which looked great.  I also downloaded couple of RX designs from the web. NE602 RX designs of fellow ham radio amateurs, VK2YE, AA7EE and ZL2BMI helped me a lot to understand the inner workings of NE602/SA602 based direct conversion receivers.

I downloaded the datasheet of SA602 which is the newer model of NE602 when Philips became NXP semiconductor. https://www.nxp.com/docs/en/data-sheet/SA602A.pdf

From NXP SA602 datasheet: “The SA602A is a low-power VHF monolithic double-balanced mixer with input amplifier, on-board oscillator, and voltage regulator. It is intended for high-performance, low-power communication systems. The guaranteed parameters of the SA602A make this device well-suited for cellular radio applications. The mixer is a ‘Gilbert cell’ multiplier configuration which typically provides 18 dB of gain at 45 MHz. The oscillator operates to 200 MHz. It can be configured as a crystal oscillator, a tuned tank oscillator, or a buffer for an external LO. For higher frequencies, the LO input may be externally driven. The noise figure at 45 MHz is typically less than 5 dB. The gain, intercept performance, low-power and noise characteristics make the SA602A a superior choice for high-performance battery operated equipment. It is available in an 8-lead SO (surface-mount miniature package).”

NE602 can be outsourced from Aliexpress.com or Ebay.com today, I guess until stocks last. It will be easier to find SA602 which is basically the same improved version. The only drawback is that SA602 is in SMD case while NE 602 is in DIP case which is easier to solder. 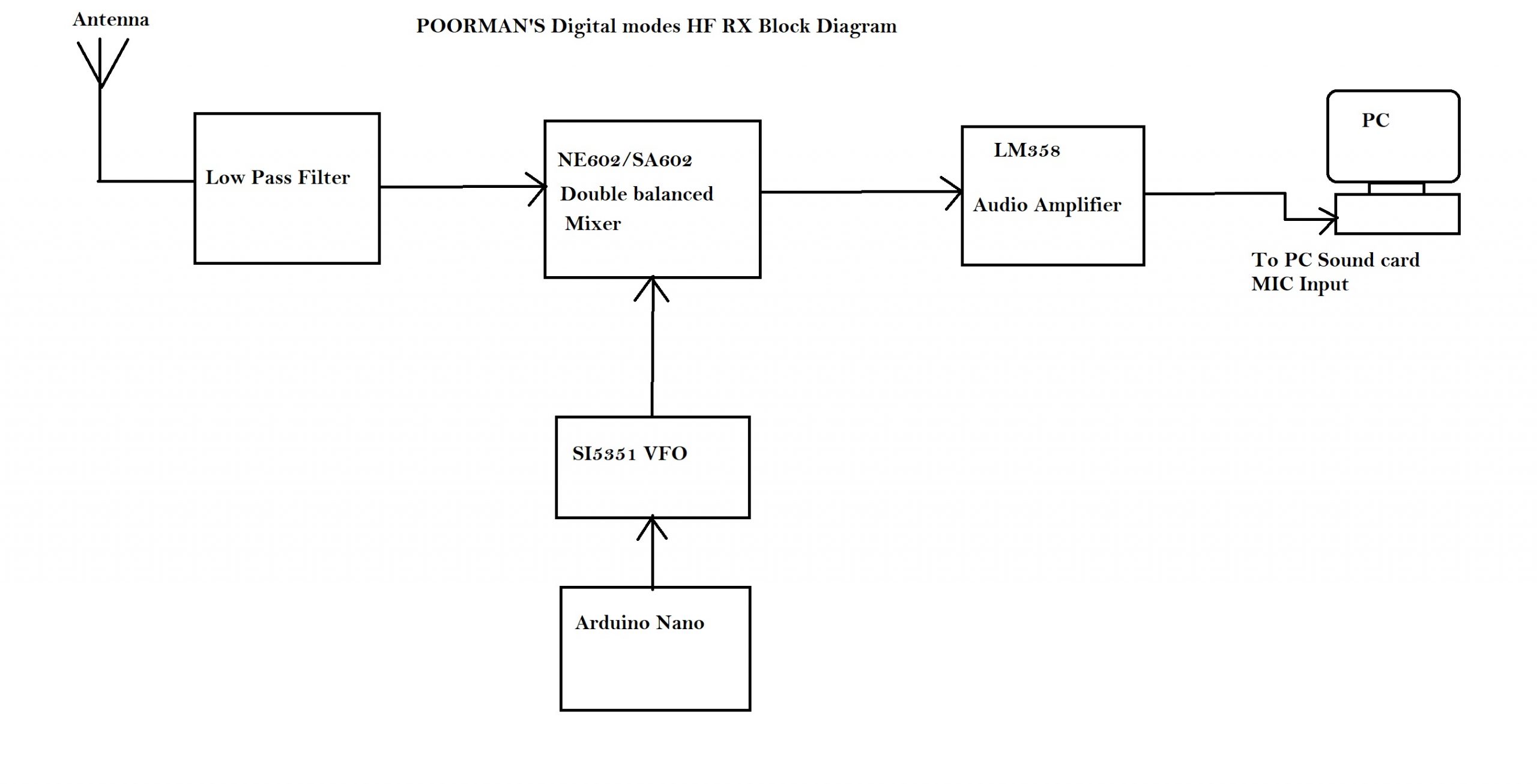 Here is the simplified block diagram of the Digital HF RX receiver. It can’t get simpler than this. The signal is picked by antenna and filtered with a low pass filter. Then injected into the magic IC NE602/SA602 which mixes this filtered signal with the VFO and outputs an audible weak signal which is then amplified by an operational amplifier to a level sufficient to drive a PC sound card mic input.

This type of receiver is called direct conversion receiver. It basically mixes the signal with vfo and audio is produced at the output of the mixer. There are some drawbacks of this method but let’s not get concerned about those!

So the VFO (Variable Frequency Oscillator) for WSPR receiver generates 14095600 hz signal which is a square wave signal which is directly injected to the Oscillator input of NE602 via a capacitor. Arduino nano controls the vfo to generate this signal. At this moment I had a light bulb moment and thought: Wouldn’t be a waste to use all this vfo, Arduino etc to just generate one RX frequency? What if I can select between FT8, FT4, WSPR and the newly launched JS8 modes. This way I can check all these popular digital communication modes. If this RX can receive WSPR then it should receive all these other modes equally well in theory! 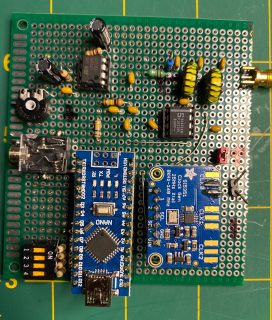 This is the prototype Poorman’s digital mode receiver I built on a perfboard. With the help of DIP switches it can be configured to receive FT8, FT4, WSPR and JS8. It works from PC usb with 5 volts. The earphone socket is for MIC input of the PC soundcard. It is currently built for 20m/14Mhz band. With a suitable low pass filter and a slight modification in the Arduino software different bands can be covered. 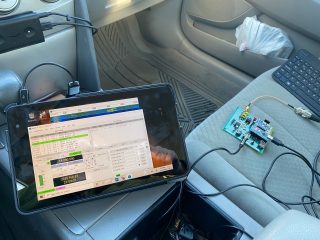 This is my test setup in my car. 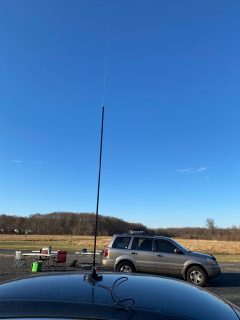 My mobile 20 m antenna which I used for tests. 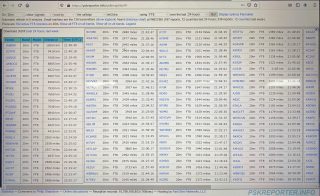 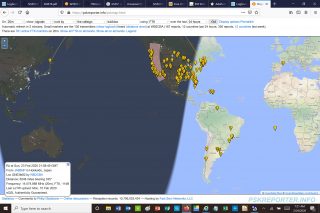 These are the stations I received with this receiver outside in a park from my car with that antenna! I couldn’t believe my eyes when I saw Japan. 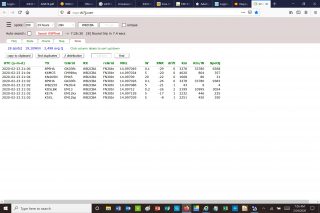 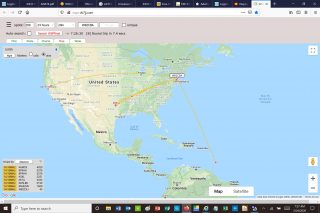 These are WSPR mode reception results of my exact setup in my car with the receiver. 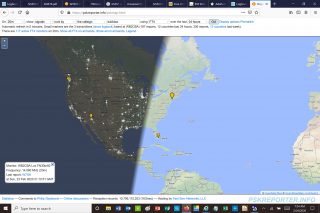 And this is FT-4 reception.

This is an introduction to my Poorman’s digital mode receiver quest. In my next article I will give the details how to build and use this simple receiver.

In the meantime start your quest to find a NE602 or SA602! The rest is common parts.